In the week of the General Election, Clifton with Rawcliffe Primary School has been holding their own elections for their new House Captains. The school was used as a Polling Station for the general election the day before and two school councillors wrote to the City of York Council to ask if the polling booths and ballot boxes could remain in school for the next day. The Council agreed and even supplied the stationery and posters for the event which took place on Friday 13 December!

The two School Councillors, Chloe and Millicent, who wrote to the local council were delighted to receive a response the same day. “We were shocked when we heard how quickly the Council responded and agreed! Having the same equipment for voting made the whole experience more exciting for the pupils.”

Year 6 pupils have been busy campaigning to be elected as the first House Captains at Clifton with Rawcliffe. New houses have been introduced following consultation with parents, pupils and staff and a lot of research from the School Council. Four significant local people were chosen for their inspirational contributions to society and life in Britain: William Wilberforce, Amy Johnson, Barbara Jane Harrison and George Leeman were selected to be house names. 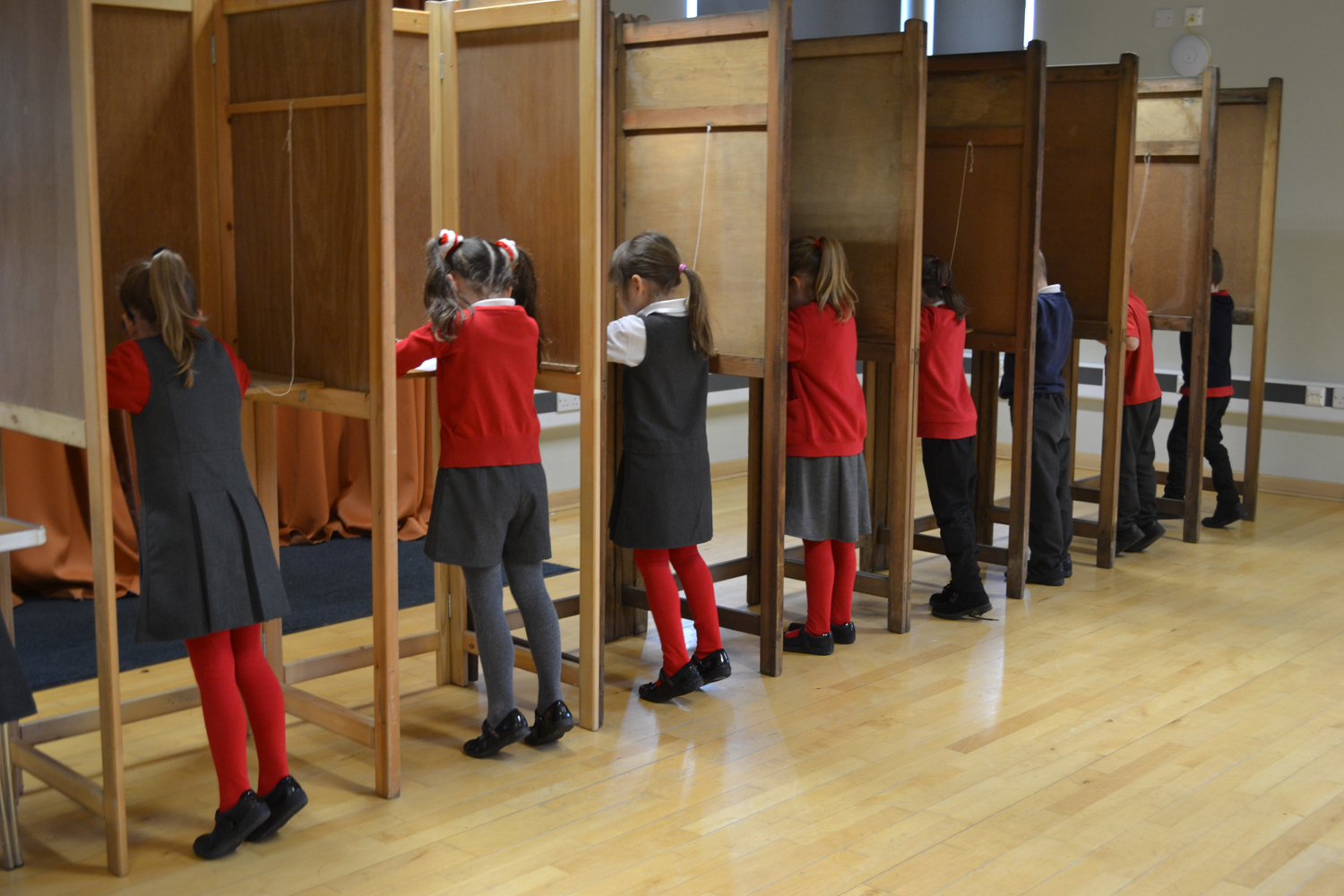 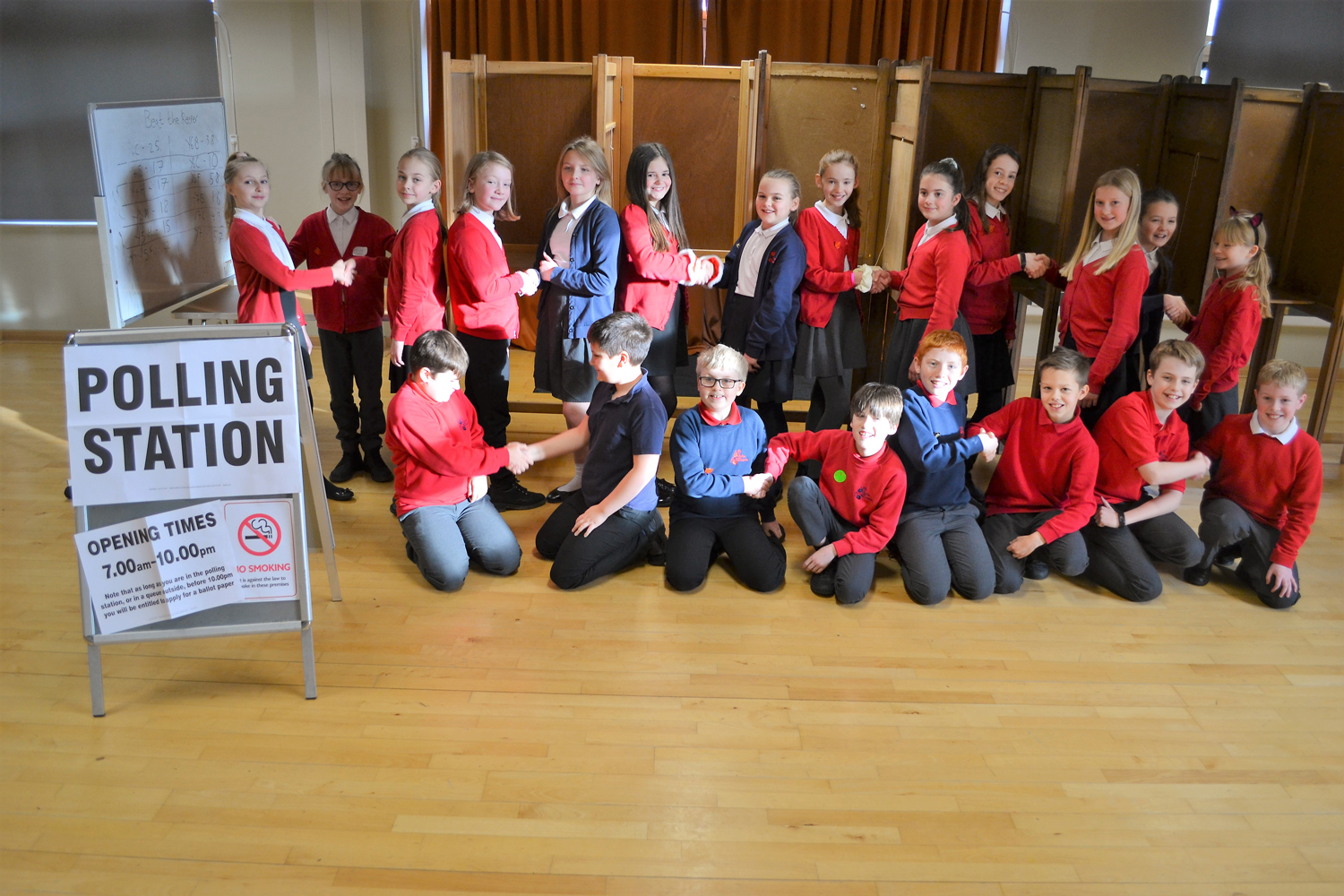 Andy Herbert, Headteacher, was delighted with the responses from the pupils: “It was great to see the enthusiasm the Year 6 children had for this first ever election of our House Captains. So many were willing to stand which is a tribute to their leadership qualities and commitment to the school”.

On the day after the General Election, pupils and staff filed through the voting booths to cast their votes using the same ballot boxes as the day before.

Andrew Flecknor, Deputy Acting Returning Officer at City of York Council, said: “We’re delighted to see this election taking place and are very happy to loan it some of our polling booths, signage and a ballot box. The event is a brilliant way of helping children understand the principles of voting and our democratic tradition.”

This was a truly democratic experience reflecting our British Values and democracy. From a list of 23 Year 6 pupils who put themselves forward to stand, four were elected following the ballot to serve as the first House Captains for the school.

A letter to all of our school community from Mr Herbert.

We had a special visitor in LKS2! We enjoyed a fantastic day with Joe's Owl Encounters & Exotic Mobile Zoo Learning all about lots of different animals. ... See MoreSee Less

If you are taking part please come along to your local library by this Saturday to complete the challenge and collect your rewards.

All children who complete the challenge will be invited to a visit by Cat Weldon author of the How to Be a Hero series on Sat 19th February. They will hear all about what it's like to be an author as well as lots of interesting facts and tales about what it was like to be a Viking. ... See MoreSee Less

Please follow the link to read our latest newsletters.

Family Matters York have two Primary Years courses starting the week after next, one in person and one online. Details are below:Time Out for Parents - the Primary Years:Tuesday evenings 7.15 to 9pm f...

Family Matters York have two Primary Years courses starting the week after next, one in person and one online. Details are below:

Time Out for Parents - the Primary Years:
Tuesday evenings 7.15 to 9pm for 5 weeks
starting 18th January, online via Zoom.
For flyer click here

To book a place or for further information please contact
Helen Atkinson on 07393 147259
email helenatkinson@fmy.org.uk
or you can find more information about our courses on our website ... See MoreSee Less

Parenting is the hardest job in the world and the most rewarding! Few of us have had any training in it because it is assumed that it all comes naturally - thank goodness we don’t assume...

A special thank you to York Cares who have produced this amazing Christmas Memories film. It was created as an intergenerational project exploring the magic of Christmas in partnership with Dandelion Arts, Inkblot Films, City of York Council and Clifton With Rawcliffe Primary School. ... See MoreSee Less

A huge thank you to our kitchen team who have outdone themselves with an amazing Christmas Dinner!
Christmas songs, party hats and lots of delicious food. ... See MoreSee Less

The Governing Board met on Wednesday 1st December 2021.
The minutes of the previous meeting which was held on the 30th September were approved as a correct record of the meeting.

The English lead, Mrs Brown updated governors on reading provision and planning across the school.

The Headteacher presented his report to governors and discussed the school self evaluation form and school on a page.

Updates from the Pathfinder Trust were presented and discussed.

The Governing Board would like to thank staff for their hard work and parents for their continued support.

We would like to wish all staff, parents, carers and children of CwR a Merry Christmas." ... See MoreSee Less

We had a special visitor in school today. ... See MoreSee Less

The Eco Council just wants to thank everyone for their kind donations towards the Re-Use Santa appeal! The charity ‘No Wrong Door’ will ensure these toys and books will reach less fortunate families this Christmas! ... See MoreSee Less

Our House Captains have been working hard to help organise our House Baking Competion.

Don't forget to bring in your cakes tomorrow so that the House Captains can judge them. #bakeoff2021 ... See MoreSee Less

Our Christmas Fair takes place tomorrow Monday 13th December. The Fair will open at 2.30pm so come and browse before the children join you at the end of the school day.

Baking Competition:
Don't forget our inter House Baking competition. Bring your creations along to your House table. A winner from each house will be picked on aesthetic appearance. Mrs Randles and Mrs Randles will then judge the best of the 4 on taste! A baking hamper for the winner. House points will also be awarded with each entry gaining a house point.

Tombola:
There will be a tombola stall outside the main hall. Tickets will be £1 each with a prize every time. Draw a 5 or a 0 to win a bigger prize.

Enterprise stalls:
Our Year 5 & 6 pupils have been busy with their enterprise projects and the results of these will be enterprise stalls at the Christmas Fair with a range of gifts and competitions. Please come along and support our pupils' hard work

Santa:
Don't forget if you have booked a Santa visit at the Fair remember to bring along your tickets. If your child is visiting Santa during the day they do not need a ticket. We think Santa is going to have a busy day!

Look forward to seeing you all tomorrow! ... See MoreSee Less

Your chance to visit the LNER Community Stadium and support your local
football team!

Tickets can be purchased in advance
online<https://york-city.talent-sport.co.uk/> or from the ticket
office – open 10am-4pm Monday to Friday.

Don't forget to get your raffle tickets. They will be on sale after school tomorrow. Lots of fabulous prizes to be won.

Raffle tickets are available to buy each day before and after school. The selling of tickets will close on 10th December and the draw will be made at the Christmas Fair.

So hurry and get your tickets to be in with a chance of winning some fab prizes. (Prize list details to follow) ... See MoreSee Less

We use Google Analytics to monitor the activity on our website to improve its usability and performance. You can disable these cookies by unchecking the box below.

We use third party services on our website to improve its functionality. You can disable these services by unchecking the boxes below.